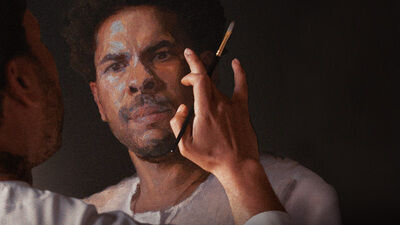 co-producer of the film, Roger Ross Williams, who directed one of the most surprising films I’ve seen about the transformative power of art, 2016’s “Life Animated,” which explores the ways Disney films helped an autistic man connect with the world around him that seemed out of reach. The Master of Light is profound and insightful in illuminating the therapeutic role of painting in Morton’s life, enabling him to address his anger at a system designed to entrap people in his situation. His stated goal is to transition to a futuristic artistic tradition in which “people of African descent have not had a dignified role” over the past centuries.

There is an amazing 360-degree view of Morton as he walks through an art museum as he finds himself surrounded on all sides by the framed faces of Caucasians. He compares his experience of finding himself shackled in Oklahoma to being on the auction block where his prison was chosen for him. Many of the film’s most dramatic moments center on Morton’s interactions with his nephew, who expresses his fear in light of the horrific killings of black people by police that fueled the Black Lives Matter movement. It is, in fact, white offenders like these who fear the giant within people like his now-awakened nephew, Morton argues, and it’s great to see the budding young artist making raps as a way to deal with his own demons.

As I watched Boesten, I kept remembering what Bratton told me about finding strength in forgiveness. “He told me “if I had stuck with everything that happened, I wouldn’t be here”. “I’ll be upset somewhere in a tavern, angry at the world.” I imagine Morton feels the same way, and indeed, there is a moment in “Master of Light” in which he seems ready to sever his bonds from his mother forever, exasperated by her apparent endeavors to prevent him from succeeding in life. However, he later tells his therapist that he ultimately wants to believe his mother, who denies her children’s accusations that she sent her son to prison in exchange for avoiding her imprisonment. In many ways, this film would make for a very rewarding double bill with Bratton’s The Inspection, considering how both films take an uncommonly frank and unsentimental look at how to persevere in the face of rejection.